What is Left When We Reemerge

Mortlake is your studio.

It became the stage for a peculiar incident that has been repeating since you started working with a medium in 1582. You decided to use your knowledge, your abilities, your studio, and the fascination that those in power had for your hermetic arts to make deals with them in order to keep your studio, your library, your precious practice, and to continue the research you are so passionate about.

All of them have been guests at Mortlake: the Queen, the sheikha, the government, the ambassador, the investor, including all of their entourages, deputies, boards, advisors, lovers, and toad eaters. Over the years the guestbook of Mortlake has become a testimony of witnessing (شهادت), a register of trades, a book of contracts. Yet nowhere is written what was dealt or agreed upon. Instead, the demonstration itself stood in as a wild card. It became the substance, the appearance, actually it became the very negotiation of the agreement between you and your guests. The subtle yet thrilling and therefore successful demonstration became a ritual, and the intangible pact concluded in this ritual is secret and only becomes apparent for a moment when the ritual is reenacted.

Prudently, you protected certain areas of your studio, your knowledge, your powers from the visitors, just as your guests have protected certain parts of their wealth and power from your reach. You chose to keep the range of your many roles and practices opaque, your communication encrypted. As an initiate, you knew about the powers of secrecy and acted on the hermetic doctrine. Your signature in correspondence with the Queen was two circles as eyes guarded by a sacred kabbalistic seven as protection for the eyes. Some people deny that you worked as a spy but your missions were those of a double agent in many ways. Your multipurpose travels are much speculated about. Richard Deacon says you went to Bohemia not for a conference but in service of the crown, successfully uncovering Spanish intrigues against Britain. Others like Frances Yates insist that your mission was vast, undogmatic—reformist and purely spiritual in nature. As a matter of fact you had become dangerously dependent not only on money but also on your medium, Kelley. You continuously needed money for rare books. Your library was growing into the most significant one in Europe. And you had to support Edward Kelley, whom you declared your medium. He was half your age, cunning, a scryer and necromancer. He had been pilloried and his ears cropped for counterfeiting. Kelley was your lifeline to inspiration. You forced him into endless séances because you hoped to contact angelic powers with his help. You used a variety of show stones—crystal balls or obsidian mirrors—translucent objects that gather, bundle, and refract light. The light—you hoped—would call the apparitions to make themselves known and become apparent. You needed Kelley for these calls and you were even ready to share all your possessions with him when the angels told him so, including your wives.

The magic ritual has been repeating at Mortlake ever since. By now the elements used in your demonstrations are scarce. They have to be mined in remote regions and rushed in with priority messengers. You conveniently use the infrastructure your partners provide so this rarely becomes an issue. But a dark cloud appeared over Mortlake over time and it is not clear whether it stems from the continuous demonstrations or whether it’s a weather thing. Sometimes you look up in worry wondering what will become of the sky and whether any of it is your fault.

Combine two elements, preferably a carbon-based reactant and an oxidant, in a brazier to create a high-temperature exothermic redox chemical reaction. The two elements produce a gas that ignites into a dazzling, silvery flame.

What a performer you are. The trick is basic chemistry, yet it proves to be mesmerizing. Some guests gasp and recoil from the flame, yet they are intrigued by your mastery and they marvel at the magic glow. A murmur embraces the room and surrounds the Queen, who sits motionless, satisfied with the event and glorying in her power. Ignoring the thrilled crowd, you remain alert and focused on the accuracy and quality of the performance. Your gaze is absent yet firm. With your right hand you carefully pour liquid into the flame, while your left hand counterbalances the movement, stretching away from your body as in a dance. Behind you, almost like your studio assistant, sits Kelley, your medium, reading from one of the precious books from your library. His fingers bookmark the passage relevant to your demonstration, in a gesture of confirmation.

When the fire ignites, it sets the room alight for a moment. Its blaze is mirrored in your eyes and in the eyes of your guests. The lapping sound of the gases, the fizzing and bubbling of the conflagration, cut into the silent room. The glow of the flame reflects on the delicate skin of the gentry and on the precious fabrics of their clothing. The whole scene is lit by the fire. And in the moment when light emanates from the brazier and bounces back from the different surfaces, a bond is built between your hands, the flame, and the faces of your guests. An immensely potent bond, but also an unstable one.

The moment of immersive delight in this decorous magic trick lasts only seconds, but it goes out with an afterglow of excitement. Then applause and satisfaction. The temperature of the room has risen noticeably, induced by—aside from the fire—the agitated bodies in the space. The bond is confirmed by a favorable nod from the Queen before she leaves.

The glowing success of the trick, but also its transitory nature, might have been the reason that your performances began to take up more and more of your time. After the Queen lost interest in your virtues, you were able to forge new alliances. You invited guests from ever more remote kingdoms and you found new variations on the demonstration. But you also developed doubts and anxieties: what if one day the flame did not ignite? Most of all, you grieve the loss of conjuring up spirits and conversing with the angels. Kelley has left you, as he was receiving more and more recognition himself. Without his visionary abilities, the crystal show stones on your desk remain lusterless and blunt. The moment comes when the glow starts to fade and you are finally at a loss with your endeavors.

I am in the lobby of the Wellcome Trust near Euston station in London. I came here because I wanted to understand why pharmaceutical companies collect art. I find you in a painting on the entrance wall. It was painted by a Henry Gillard Glindoni, an illustrator who lived in the nineteenth century. In his painting he depicted the very moment when you demonstrated the effect of combining two elements to cause combustion or to extinguish it. I recognize your house in Mortlake, the clock next to the entrance, the alligator hanging from the ceiling like a chandelier. I sense the smell of sulfur, incense, and ink. The caption next to the painting says: “John Dee performing an experiment before Queen Elizabeth I.” Henry S. Wellcome, the founder of the pharmaceutical company Burroughs Wellcome, bought the painting in Northern Ireland in the late 1900s. Burroughs Wellcome introduced the idea of selling medicine in tablet form instead of powder and liquids. The company’s trademark was “tabloid.” They also introduced direct marketing to doctors by giving them free samples of their products. They eventually made a fortune with AZT, a medical treatment for HIV/AIDS infection that they patented in 1987. As they held the monopoly on this treatment for AIDS, they were able to control the price for eighteen years, until the patent expired. By 1995 they had merged with Glaxo to form Glaxo Wellcome. By 1999 they had together become the world’s third-largest pharmaceutical company.

I look at your vivid gesture and think of the moment Mr. Wellcome bought your painting. He must have seen a mirror reflection of himself in the painting, as if the flame in your demonstration made his face glow. The moment the glow reached his skin, an exchange of powers probably occurred, and a bond was built with Henry S. Wellcome too. That’s it, I’ll buy it! Henry had tried to sell invisible ink before he turned sixteen. It was only lemon juice, but he placed an advert in the Garden City Herald. Pharmacy was all about performance and Henry knew this.

At the time Henry bought your picture, the circle of human skulls that Glindoni had painted around you had already been painted over. The circle of skulls was the accoutrement of practitioners of black magic. Glindoni had included them, but then decided to paint them over, to render them invisible, since they made the painting look eerie and occult and probably hard to sell. So Henry could not see them when he discovered the painting in a shop in Northern Ireland. Over time, chemical changes in the pigment caused the overpaint to become transparent and some of the skulls reappeared. They are now fairly visible. I can see at least two on the ground behind you. Henry would have probably shied away from buying it at the beginning of his career. Now, with the painting prominently adorning the lobby wall of the Wellcome Trust, I wonder what will become of the performance. 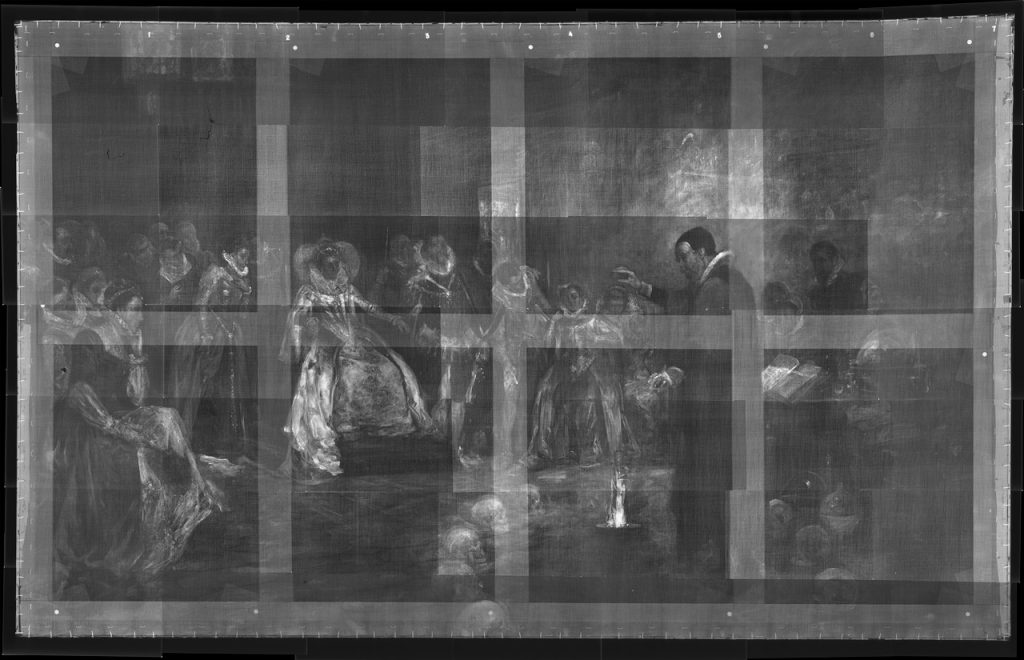